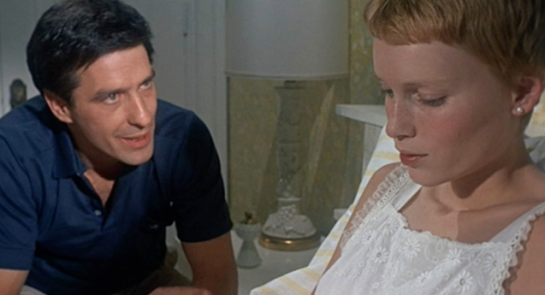 I’ve written before that zombie films are metaphors for the times in which we live, and that can be expanded to include all classic horror pictures.  In honor of Halloween, I wanted to spotlight one of my favorite horror pictures, Roman Polanski’s Rosemary’s Baby (1968).

It’s one of Polanski’s best and most chilling.  Technically, it’s a perfect film.  Atmospherically creepy, the imagery is tight and intense.  Every frame informs the story and moves it forward.  Thematically, it works on two levels: as both a psychological thriller and as an exploration of gender and power dynamics.
When young, happy newlyweds move into the coveted Dakota building on West 72nd Street, their lives are full of promise and hope.  Rosemary (Mia Farrow) is typical of many pre-feminist women of the era, happy to manage the affairs of the home and dote on her ambitious husband, Guy (John Cassavetes).  Things quickly turn dark for Rosemary when Guy makes an insidious deal to further his own acting career.  Guy’s efforts are aided by the creepy neighbors in the building, and Ruth Gordon steals every scene with her deliciously ghoulish performance as the busybody next door who slyly works to confine Rosemary further.
What is so horrific about Polanski’s film (based on Ira Levin’s novel by the same name) is the systematic and deliberate infantilization of Rosemary, in which she gradually becomes isolated, losing control over her environment and ultimately her body.  Her doctors betray her, waving off concerns about the pregnancy as the mere rantings of a hormonal woman.  Notice how even her wardrobe changes as this process occurs, from the confident and hip styles of the sixties to the baby doll dresses that present her as more and more childlike and dependent.

“Rosemary’s Baby echoes its time, responding to the 1960s’ cries for female empowerment in the wake of The Feminine Mystique‘s exposé of women’s second-class-citizen status…the elegant mind games of Rosemary’s Baby feel just as relevant today as they did back in 1968. In an election year that has seen charges of sexism leveled by the same party that wants to roll back abortion rights, Rosemary’s Baby forces us to see the world as it appears from one legitimately frightened woman’s perspective: claustrophobic, intimidating, and wearing a smile on its face when, really, it’s out to get you.” —Tim Grierson, Village Voice