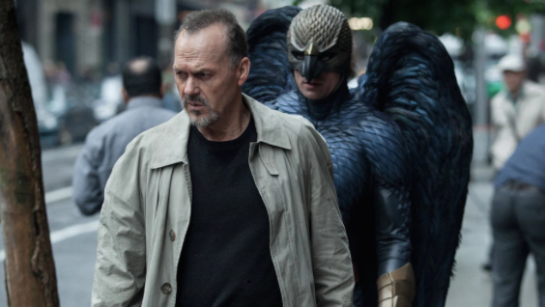 In cinema, the Long Take is one long uninterrupted shot lasting several minutes and usually requiring careful and complicated choreography.  It’s a technique that is almost as old as film itself, yet over the years the technical aspects of the long take have evolved as directors and cinematographers rise to the challenge of pulling off even bigger and better “oners.”

Alejandro Gonzalez Iñárritu’s Birdman, which won an Oscar for best film this year, is a recent example of a long take – in fact the entire movie is intended to have the effect of one long tracking shot.  But this is nothing new.  Alfred Hitchcock employed same device with his 1948 film, Rope.  Hitchcock was limited by the technology of the time. Because reels of film were only 10 minutes long, the director was required to hide the cuts; many of the takes ended on a nondescript surface so the next roll of film could pick up right where the last one left off.

The use of the long take is often a spectacular display of technical acumen, but it also risks breaking the film’s spell with a flashy moment for the filmmaker to shout “look at me!” when it doesn’t serve the story.  It is most successfully executed when we don’t realize that it’s happening.

While this is by no means comprehensive, check out a select list of my favorites:

Orson Welles offers a master class in the long take with the opening shot that begins with a ticking bomb being hidden in the trunk of a Cadillac. Throughout the scene, the camera loses sight of the car and catches up to it as the car weaves its way in and out of busy streets.  At the same time, the shot establishes Charlton Heston and his lady friend as they meander their way to the US/Mexican border.  Moving back and forth from closeups of Heston and friend to wide shots of the car on the street, the use of the long take masterfully amps up the tension while kicking off the story, which culminates in both a dramatic kiss and the explosion of the bomb.

With the blessing and cooperation of the governments of both Cuba and Soviet Union, director Mikhail Kalatozov sought to make a film about the effects of colonialism under Batista. What he ended up with was a film that neither country was crazy about, and yet it contains a long take that is the source of delight and reverence of film geeks everywhere.  The shot I’m referring to, of course, is the funeral procession in which the camera starts with mourners on the street surrounding a coffin. The camera then rises impossibly high, scaling a four-story building, crossing the street, passing through a cigar factory, continuing through a window and down the street before catching up with the funeral procession from a perspective high above. Today this is a shot that would make a drone pilot nervous having to weave among all the people in the buildings and throngs on the streets below, but Kalatozov pulls off this remarkable technical achievement while underscoring the seeds of revolution of the time.

At just under 2 minutes, this is the shortest and simplest scene highlighted here.  The beauty of the shot is that the action takes place on a ferry.  While the camera and the actors remain relatively static during the exposition, the background is constantly changing as the ferry crosses the waterway creating a dynamic frame full of movement and energy.  The shot works as a metaphor, too.  Roy Schneider’s police chief is reaching out to the mayor about closing the beach until they catch the shark, but by the time the ferry reaches the other side, it is clear that the mayor will shut down his idea and leave him in his wake.

In this iconic example of the long take, the camera starts outside of the Copacabana club and follows Ray Liotta and Lorraine Bracco as they make their way through the labyrinthine corridors under the club, around the bustling kitchen and out to the front of the dining area just in time for the two to take their seats before the show starts.  The stylish scene dynamically establishes the mood and the context, the relationship between the two characters on their first date, and the bravado of Liotta’s character as he casually greases the palms of the club employees along the way.  By the time the characters sit down, the audience is just as charmed by Liotta as Bracco’s character.  The technical complexity of the shot never gets in the way of the storytelling and serves to enhance the status of Liotta’s character in this classic gangster film.

There are a number of long takes in this dystopian story, but the one that always gives me goosebumps is a pivotal scene where Clive Owen’s character has recently connected with his ex-wife played by Julianne Moore. The camera stays mostly in the car, lulling us into a false sense of security as Moore flirts with Owen while they drive through the woods. Soon the car is ambushed by heavily armed hordes. Someone is shot, and the car flees in reverse of pursuing attackers. It’s a frightful, frenetic scene that is all the more terrifying because of the relative banality of the beginning.

“We had 12 days to do the car attack scene. 10 days into it, we were still staging it. After 12 days, we were going to lose the location. Day 11 came and there were accidents, and we could only do 2 takes a day. On the last day, we knew we were losing location next day. In the morning it was great, but an operator fell down so we only had only one more shot. We were shooting the last take, everything goes great, but then by accident the blood spills onto the lens. I yelled cut, but there was an explosion and nobody heard me so they kept shooting. Then, later, I realized that the blood splash was the miracle [in that scene].”  – Alfonso Cuarón

A close second for me is the scene that comes late in the third act, which is not only technically brilliant but packs an emotional punch served with such elegance and grace by Owen scurrying through a ruined hospital to rescue a crying baby.  And by the way, that one is over 10 minutes long.

Clocking in at a whopping 6 minutes, this is one of the longest examples of the device in which the dramatic scene unfolds around us. Matthew McConaughey’s character Cohle reluctantly participates in a robbery that goes bad in an unfamiliar and hostile neighborhood. The camera starts outside on the street with Cohle waving a gun, proceeds inside the house to catch the robbery screw up, then follows him as he flees through the neighborhood amidst howling dogs and random gunfire.  This long take is a shot of adrenaline in a television series composed mostly of moody backstory.  It’s violent and raw, intense and claustrophobic.   The camera captures McConaughey scanning the unfamiliar territory with wild eyes and makes us feel like an accomplice.   But for all it’s trying to accomplish, it never loses sight of the story or the motivations of McConaughey’s character.  No doubt, this scene will be studied in film classes for years to come.

“It took a lot of planning; there was a lot of talking with my grips, the gaffer, the cinematographer, the operators, just to lay down the things I wanted to do. I wanted to see a helicopter. I wanted to go through houses, I wanted to go over fences, and I wanted it to be unbroken. To achieve that, we required the involvement of every single department, like a live theatre show. We had make-up artists hiding in houses so they could dash out and put make-up on [Cohle’s hostage] Ginger’s head. We panned away for a second to do that – when Cohle calls Marty. We also had ADs peppered around the neighborhood with extras who had specific things to yell and specific places to run. We had stunt guys coordinating with stunt drivers to pull up at the right time, special-effects guys outside throwing foam bricks and firing live rounds.” – Cary Fukunaga

The long take in Episode 2 of Netflix’s new series Daredevil is limited to a fight scene in a hallway.  At 5 min long, the shot starts with our hero Max Murdock aka Daredevil looking at a door at the end of a long hall, behind which lies a kidnapped boy.  Passing in and out of the hallway are Russian thugs.  Like a skydiver making his first solo dive, Murdock takes a deep breath and throws himself down the hallway taking out the bad guys as they come at him from all directions.  The fight feels real and dirty and ends in Murdock rescuing the boy but not without his share of bruises.  The long take succeeds in launching the blind lawyer into superhero status armed only with his fists and sheer willpower.

By [fight coordinator, Philip Silvera’s] estimation, the stunt men ran through the five-minute shot somewhere between eight and 12 times…Hearing about the kind of preparation and work that went into the fight, it only makes sense that the action breaks down into a tired, sloppy brawl by its last moments…“The fight has to continue the story,” Silvera says. “If it doesn’t, it’s just punches and kicks.”