What working on Friday Night Tykes taught me about masculinity. 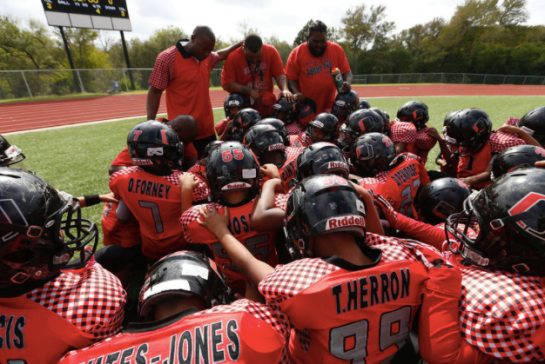 This year National Geographic magazine dedicated an entire issue to the “shifting landscape of gender” as our understandings of biological and social concepts evolve. One particular article that resonated with me was “The Many Ways Society Makes a Man” about the rites of passage of boys to men:

“The questions surrounding manhood and its kindred concepts of manliness and masculinity have been embroiled for centuries in politically inflected debates about culture and biology. Anthropologists and sociologists generally come down on the side of culture, believing that manhood is something societies construct. “Men” are made, not born, argues Michael Kimmel, a professor of sociology at Stony Brook University: “Manhood is not a manifestation of an inner essence … [it] does not bubble up to consciousness from our biological constitution; it is created in our culture.”

Historically, cultures around the world have developed rituals and customs to mark the development of boys to men. From initiation rites like the Lakota Sundance where boys are pieced with pegs while staring at the sun, to tests of strength that seven-year-old Spartan boys faced in 800BC, to teenage circumcision rituals in western Kenya, boys have had to endure often violent and agonizing ceremonies.

“It’s worth asking: Why? The disquieting answer, of course, is to prepare for war. As anthropologist David Gilmore notes, where resources are scarce and the collective welfare uncertain, “gender ideology reflects the material conditions of life.” Boys are “tempered” and “toughened” so they may fulfill the classic duties to procreate, provide, and protect that men have performed for millennia. Whether it’s marshaled to ward off the aggression of other males or to capitalize on weakness, violence is the leitmotif of manhood in countless cultures. To judge from video games, action movies, hockey brawls, UFC fights, and homicide rates in America, violence enthralls men even where material conditions of life are not dire.”

That got me thinking about Friday Night Tykes, the Emmy-nominated show that I’ve worked on for the past 4 years resulting in 60 one-hour episodes.  We told 40 stories about teams in the Texas Youth Football Association in the San Antonio area and 20 about teams in western Pennsylvania’s steel country. More than just a show about football, the series was about life in dried up communities where the dream of getting out is stitched into pigskin.

At the end of every summer, thousands of kids in America sign up for football, indifferent to the violence of the sport where grown men shout at children, “We’re going to war,” “There should be no reason why you can’t make them cry,” and “Rip his head off and make him bleed.”  They are unconcerned by reports of the damaging effects of childhood concussions. And each season we used the show as an opportunity to ask questions like: What are the costs of pushing kids so young so hard?  How much is too much? Are we doing what’s right for our kids?

Ask parents or coaches about the game, and they’ll tell you that youth sports are important for all the right reasons: it provides structure and discipline; it teaches teamwork and communication; and it develops responsibility and sportsmanship. More than anything, youth football, as many coaches see it, is an opportunity to be role models in players’ lives, many of whom come from single parent homes.  In a culture that equates manhood with toughness and stoicism, they say that football teaches the boys how to be men.

Being a role model cuts both ways, though. Demonstrations of both good and bad behavior are what kids soak up like sponges.

SEASON 1: WINNING AT ALL COSTS

“[Losing] freaking hurts because you have no idea the kind of work that I put in, sleepless nights, stress, the problems that have occurred at home because I’m here at the football field. Today was the biggest day of my life, and I didn’t meet the expectations that I wanted to meet.” – Coach Charles

For Coach Charles winning is everything.  He has alienated his family and sacrificed friendships to put his Broncos team first in his life. Having lost all perspective, he sees no problem teaching kids to play dirty and encouraging his 8- and 9-year-old players to injure their opponents. Ultimately, Coach Charles is suspended by the football league after Season 1 airs. 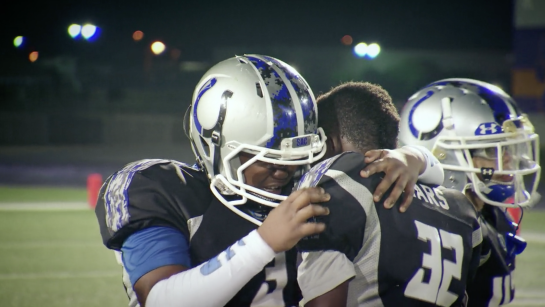 “Brandon would have been there for anybody else. We need to be there for him. That’s something that he’s going to remember for the rest of his life, the day that his grandfather was buried. That kid’s hurting and that’s far more important than going to beat the Mission Mustangs” – Coach Marecus

Coach Marecus and the Colts

When the grandfather of Colts player Brandon dies unexpectedly, Coach Marecus decides that it’s important for the team to go to “Pop’s” funeral on the same day as a big playoff game. Having been raised by his own grandfather, Coach Marecus identifies with Brandon’s grief. The emotion of the day gets the best of the team.  After attending the service and then driving 4 hours to the football game, the Colts just can’t pull it together for the win.

“We’re having disagreements right at game time. Vital time not to have a disagreement. We have a coach that hasn’t been at practice all week. I don’t know what made him think that he was going to come out here and coach these kids today when we put in some new stuff.” – Coach Bruce

Coach Bruce and the Seahawks

Coach Bruce establishes a new team, the Seahawks, to provide positive male role models for kids in his community. Plagued by poor communication among the coaching staff, the Seahawks chances are slim before they even get started. An airforce veteran, Coach Bruce is big on war analogies, often relating football games to going to battle. He stresses loyalty and responsibility to the players, yet he can’t get his own coaches to show up on a regular basis. Lack of commitment among the adults trickles down to the kids, and by the time Coach Bruce realizes that, it’s too late. Kids also fail to show, and their dwindling numbers make it impossible for the team to make the playoffs. The Seahawks end the season with less than half the players who started.

“Boys are allowed to cry just like girls are. They have hurt feelings as well so it’s ok to cry. Because if not, you’re just gonna hold it in and you’re gonna take all that anger out on somebody else.” – Antoinetta Dubose

The Dubose Family & the 210 Outlaws

If football is preparation for life, then the Dubose family seems to have a winning formula. When the promise of a better job brings the family to San Antonio from Alabama, the Dubose twin brothers have to adjust to their new surroundings. Their mom Antoinetta sees the 210 Outlaws as place for her boys to make new friends while doing what they do best: playing football. Family comes first, however, and when an overzealous coach tells the kids to quit crying after a big loss, Antoinetta disagrees saying that it’s healthy for boys to express their emotions.

The entire series of Friday Night Tykes is available on Netflix.