Councilwoman Laurie Cumbo speaks at the bill signing of the “Stop Sexual Harassment in NYC Act” at City Hall, May 9, 2018.

Yesterday was a full circle moment — to be present at City Hall for the bill signing of the “Stop Sexual Harassment in NYC Act,”  a comprehensive package of legislation strengthening New York City’s anti-sexual harassment policies and combating sexual harassment in the workplace.  Last month the City Council  passed 11 bills that will expand worker protections and improve transparency about harassment in city government— some of the toughest harassment protections in the country.

NYC Mayor Bill de Blasio at the bill signing of the “Stop Sexual Harassment in NYC Act” at City Hall, May 9, 2018.

With the swiftness that the issue demands, the research and the passage of these bills has progressed rapid through local government in the wake of the #metoo movement to shine a light on sexual harassment and predation nationwide. The council members acknowleged that every new revelation of harassment and assault is a failure of the City to protect its most vulnerable residents.

On December 6, 2017 the NYC Human Rights Commission held its first public hearing on sexual harassment in over 40 years. Building on the foundation of the City’s historic “women and workplace” hearings of the 1970s which catalyzed a national movement to recognize and address sexual harassment in the workplace, New Yorkers from a variety of industries testified on their experiences of sexual harassment and challenges in reporting it.  I was there to support New York Women in Film and Television board president, Simone Pero, who was speaking on behalf of the entertainment industry.

NYWFT board president Simone Pero testified:
“Although sexual harassment and discrimination have been a problem from time immemorial, and there is rightful outrage at the present moment, a seismic shift is occurring on how women — all women — are perceived and treated in our workplaces. Our approach at NYWIFT is to promote dialogue, provide tools and knowledge, and to foster compassionate, inclusive solutions. As responsible citizens of New York and representatives of the most influential industry in our culture, we look forward to working with the City of New York and this Commission to up-level the discussion with an open and holistic approach to expand our solutions. We welcome the opportunity to join our collective understanding and resources to ensure that all women in media and entertainment work in healthy, equitable and safe environments.”
New York City Public Advocate Leticia James, who co-sponsored one of the bills mandating anti-sexual harassment trainings at private companies, cut to the heart of the immeasurable loss of this epidemic:
“Sexual harassment is pervasive, it’s corrosive, it has been a silent roadblock on the road to career growth for generations. Up to  85 percent of women report today that they have been sexually harassed at work according to a 2016 report by the Equal Employment Opportunity Commission. We know this. What we do not know, what we can never know is what we have lost. How many women were forced to quit jobs or pushed out of careers they excelled at? How many left entire industries? How many women have shelled their ambitions, their hopes and their dreams? Lost their livelihoods because of retaliation? How many billions of dollars in productivity were lost due to toxic workplaces? How many inventions were never invented and companies never started and ladders never climbed and glass ceilings never cracked? We just don’t know. We will never know.”
The NYC Human Rights Commission released a report on April 25, 2018 with policy recommendations based on this hearing. 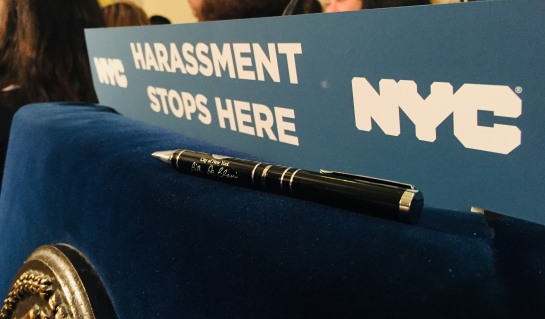 Thank you to all the sponsors and advocates for making New York City a safer and more equitable place to work. The specific bills that Mayor Bill deBlasio signed yesterday are: 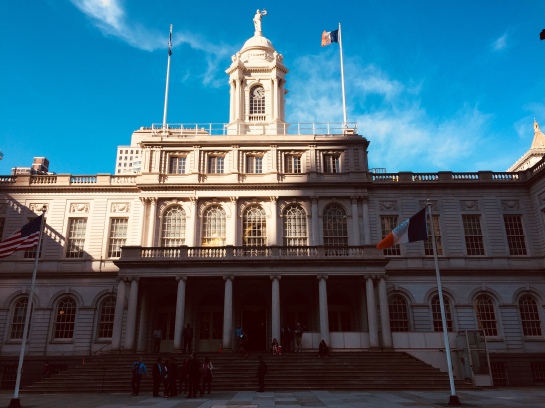