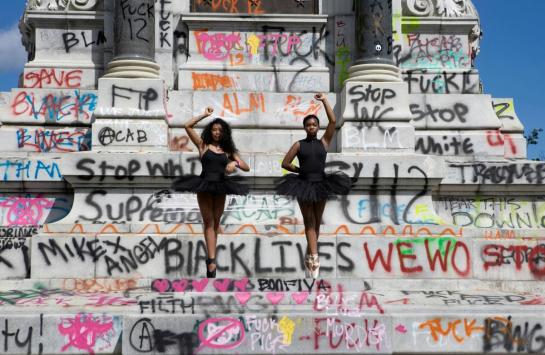 Ballerinas Kennedy George and Ava Holloway at the base of the Robert E. Lee statue in Richmond, VA. June 5, 2020. Julia Rendleman/Reuters

What a year we’ve had.  And what a time we have in front of us.  Covid-19 is a seismic event that revealed cracks in the foundation of American society: from massive income and wealth gap, to the failings of a healthcare system that is tied to employment.  Equally significant is the momentum of the social justice movement Black Lives Matter that sparked nationwide protests against hundreds of years of racial inequity, brutality and injustice.

When our world opens up again, we should ask ourselves: what kind of society do we want to live in?  And how do we give meaning to the crisis that we’ve survived and are still enduring?

I recently read an opinion piece by columnist Leonard Pitts Jr who spent last year reading works by women.  He noted that “my bias deprived me of whole vistas of discovery.”

“This past year, has served as a reminder to never be too smug about one’s own enlightenment. Because enlightenment is not a place one reaches but a process always ongoing. And it requires not just a willingness to acknowledge that one harbors biases but also a recognition that they will not go away on their own. One has to make them go away. And then one has to get up the next day and do it again.” Leonard Pitts Jr

In an effort to confront my own bias, over the past few years I’ve made a conscious effort to read more authors from backgrounds that are different from mine, with an emphasis on black authors. And in doing so I rediscovered some old favorites and was shaken to the core by new authors and stories.

Here are some recent reads that really affected me: END_OF_DOCUMENT_TOKEN_TO_BE_REPLACED

END_OF_DOCUMENT_TOKEN_TO_BE_REPLACED

The Baron in the Trees, book sculpture by Su Blackwell

It’s that time of the year again. Time for Busy K’s 2015 book list. I’m realizing that most of these stories have been adapted for the screen. Hmmm, interesting.

END_OF_DOCUMENT_TOKEN_TO_BE_REPLACED

It’s November already, and time for my 2014 list of favorite books.  This year, I’m including audiobooks as well, which have been a real life saver during another dreadful commute from Brooklyn to Newark.  Enjoy! END_OF_DOCUMENT_TOKEN_TO_BE_REPLACED

It’s time for my 2013 book list!  Here are my favorite books this year.

END_OF_DOCUMENT_TOKEN_TO_BE_REPLACED

Oprah has her book club, so here is mine.  These were my favorite books this year.  What were your favorites? END_OF_DOCUMENT_TOKEN_TO_BE_REPLACED