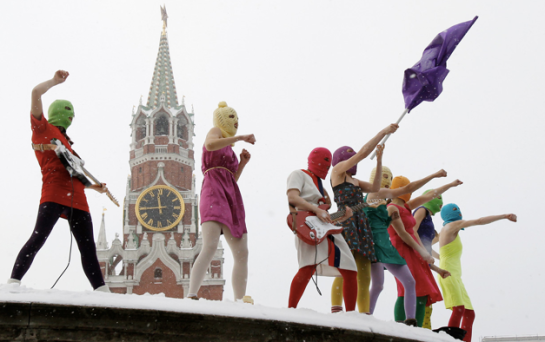 Pussy Riot is a female punk rock political collective based in Moscow known for their provocative guerrilla performances in well known public spaces.  In February of 2012, they staged a demonstration to protest the union of church and state on the altar of the Russian orthodox Cathedral of Christ the Savior, for which they were arrested and held for 6 months without bail during a trial that many considered a sham.  No one was hurt during the demonstration, and the actual performance was shut down by security within 40 sec.  And yet the three young women, Nadia Tolokno, Masha Alyokhina and Katia Samutsevich, on trial were convicted of “hooliganism motivated by religious hatred” and sentenced to two years each in a labor camp.

Much has been covered in the press both inside and outside of Russia.  Governments of the European Union as well as the United States have called the sentencing disproportionate.  Amnesty International has labeled the women “Prisoners of Consciousness.”  Public figures from Aung San Suu Kyi to Madonna have championed Pussy Riot’s commitment to freedom of expression.  The directors of the documentary “Pussy Riot: A Punk Prayer,”  Mike Lerner and Maksim Pozdorovkin have put together a film from court footage and interviews with the family in this story about about the group and the case.  It premieres on HBO tonight at 9pm (June 10).
END_OF_DOCUMENT_TOKEN_TO_BE_REPLACED